Contents show
1 Why is Too Much Sodium Bad for Our Weight?
2 How to Make the Switch from High to Low Sodium Foods
2.1 About the author
2.1.1 John Esposito

If you were to examine the diet of your average American, you would find that it consists of foods which are way too high in calories, while at the same time lacking in essential nutrients that we need. Many of the micronutrients that we eat such as potassium, manganese, magnesium and copper aren’t found in abundance in most foods, causing many of us to be deficient in these nutrients.

The one exception here would be sodium, where most people are taking in way too much of an excess of this nutrient. While sodium is an essential nutrient that plays an important role in functions such as blood pressure regulation and maintaining homeostasis within our cells, the vast majority of us are consuming way too much of this mineral to where it is detrimental to our health.

Why is Too Much Sodium Bad for Our Weight?

Overconsumption of sodium can be detrimental to the body in numerous ways, specifically as far as our weight in concerned, it encourages weight gain. This is because of the role that sodium plays within osmoregulation, or fluid balance. This means that the more sodium you consume, the more water weight your body will accumulate to balance out the equation so to speak. 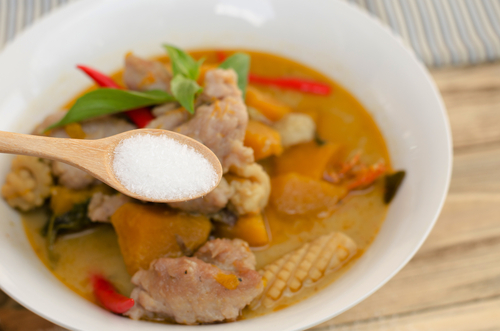 Having sodium levels that are too low in the body will most notably affect muscle contractions, as sodium is highly evolved in the cell signaling process here. Without the presence of sodium the signal travelling from the brain to the nerve would essentially not connect, which means no contraction of the muscle in question.

As far as problems with sodium go, more often than not a person will be consuming much more sodium than they require so they won’t have to worry about problems concerning muscle contraction, however they probably will be carrying some extra weight around with them.

Another problem that can arise from over consumption of sodium is bone loss. This is because the body uses calcium along with other minerals housed within our bones to properly balance out the levels of sodium in the blood. If the body doesn’t have a sufficient amount of calcium within the blood to balance out the excess sodium, it pulls what it needs from the body’s reservoir which is the skeleton.

Kidney disease is yet another potential threat we face from overconsumption of sodium, which can damage the lining of the blood vessels which supply blood to our kidneys. If the kidneys aren’t able to function to their full ability then cannot remove the proper amount of sodium from the system, which increases blood pressure and encourages further kidney damage.

Lastly, an increased risk of developing stomach cancer is another potential problem you have to consider as far as overconsumption of sodium is concerned. Sodium encourages stomach cancer because it is the preferred source of food of a bacterium called Helicobacter pylori, which is routinely linked to stomach cancer.

How to Make the Switch from High to Low Sodium Foods

Determining what foods are good versus those that are bad based on their salt content is pretty simple and straightforward. While reading the nutrition label is always going to be the most accurate source of information you have available to you, there are some foods types you can avoid altogether without having to spend the time reading the label. 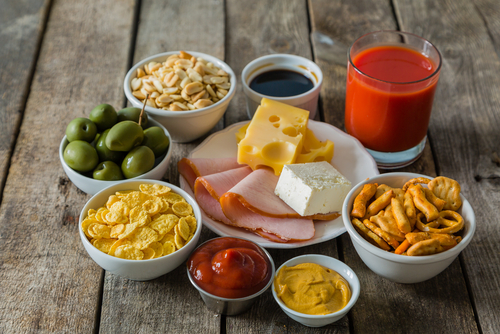 Processed meats are going to be the first food item you want to look to eliminate from your diet. These products not only contain an excess of sodium which we don’t want, but they contain salts and other preservatives which aren’t healthy either.

The same concept should be applied to prepared frozen foods, as they too contain an excess of these ingredients that are going to greatly encourage fat gain. Look for fresh alternatives whenever possible, an even better strategy is to prepare these foods on your own. That way you know precisely how much sodium is going into your food along with all the other micro and macronutrients you may need.

High sodium drinks are another type of food that you can easily eliminate from your diet, and one that you probably weren’t too aware of. Instead of picking up that canned or bottled fruit juice, pickup some fresh whole fruit along with some yogurt to make your own healthy smoothie.

Spices are great tools to use here to give your food some added flavor without adding anymore calories to the meal. Using spices in place of salts is also an effective way to reduce your intake of sodium, and to encourage weight loss.

Top 4 Healthy Alternatives to Meat-Which Plant Proteins are the Best?

Protein Powders: Basics You Should Know