Contents show
1 1) Salmon
2 2) Tuna
3 3) Mackerel
4 4) Cod
5 5) Sardines
6 6) Trout
7 Concerns about eating fish
8 Best ways to enjoy fish
9 About the author
9.1 John Esposito
We’re sure you’ve heard all about good protein sources — particularly from lean red meat, chicken, eggs, legumes, nuts, and seeds, and fish. Fish is an excellent alternative for those looking to eat less red meat due to their high protein content, vitamins, minerals, and omega-3 fatty acids.   Fish are also rich in healthy fat, which is good for the brain. It’s also a low-calorie protein source compared to other protein sources such as meat and poultry, making it a better option for those of us looking to lose a little weight.   Granted, there is a plethora of fish to eat — but it’s important to look at the best options that you could add to your diet in a pinch, such as tuna, salmon, sardines, and mackerel.   According to New York-based nutritionist Wilson Smith, “Fish isn’t only rich in protein and omega-3’s, but also nutrients such as vitamins A, C, and E, and important trace minerals such as zinc, selenium, calcium, and iron. Seafoods like prawns and oysters are also high-protein choices that contain selenium in the former and zinc in the latter.”   Oh, and did we mention they were delicious, too?   Let’s take a look at some of the fish options that have the highest protein concentrations to add to your diet.

Salmon is loaded with vitamins, minerals, omega-3s, and heathy fat. It’s also hella delicious. Therefore, it’s one of the best protein sources from fish that you can add to your diet. Salmon is delicious when roasted with a squeeze of lemon and a dash of salt and pepper to round it out. It’s also a great source of vitamin B6 and B12, representing 50% and 90% of your recommended daily intake of both vitamins, respectively, per serving. Gram for gram, it’s also one of the richest fish-based protein sources, with 40g for every 100g of fish.

Not to be outdone by its cousin, tuna contains the highest protein concentration against all other types of seafood and fish. It’s also loaded with vitamins such as vitamins A, B12, and B6, apart from being a very satisfying fish (thanks to its meaty, robust texture). Per 100g, tuna has 50g of protein, with just as much healthy levels of vitamins A, B6, and B12. In other words, it’s the steak of fish.

Mackerel contains ample amounts of vitamins B6, D, and B12, apart from adding a crucial dose of trace minerals such as magnesium. With 38% protein content per 100g, it’s another protein-rich fish option that is loaded with healthy fats and omega-3s. Mackerel is an excellent protein choice for individuals looking to lose a bit of weight, and a tasty one at that.

Speaking of individuals looking to shed a few extra pounds, codfish is low in calories and rich in B-vitamins, apart from other nutrients. Its white, mild-tasting flesh is suited to being paired with robust flavors such as chili, pepper, lemon, and parsley. They’re great battered, fried, and dipped in your favorite sauce.

Oily fish have great benefits, and sardines are another example of one that’s packed with nutrients like iron, selenium, vitamin B12, and calcium, apart from a hefty dose of protein and omega-3 fatty acids. Sardines contain as much as 50% per 100g, which ranks among the best protein-to-weight ratios as far as fish are concerned. For such a tiny fish, it sure packs a solid punch.

And last, but not the least, trout. Trout has all the vitamins you need, and then some — with some essential minerals like magnesium, calcium, copper, and iron to boot. Trout is a great fish to use in sandwiches, as well as hearty fish stews and soups.

Mercury contamination is concern, and understandably so — no one wants to consume mercury-addled fish or other toxic chemicals due to the potential harm they could cause.   For instance, both freshwater and saltwater fish are exposed to the same toxins, such as polychlorinated biphenyls (PCBs), dioxins, and mercury, therefore it is essential to consume a variety of fish from sources with the lowest known contaminants.   There are certainly some fish that have higher levels of mercury that should be limited or avoided – such as shark. king mackerel, and swordfish.   However, in the final accounting, the proven health benefits that fish consumption brings far outweigh the potential harm as confirmed by researchers. 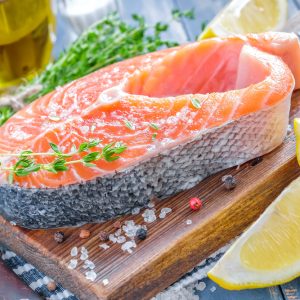 There are plenty of ways to enjoy fish, and they involve dry cooking methods. This means roasting, grilling, broiling, or poaching. Fish is also delicious when sauteed with a little extra virgin olive oil. For additional flavor, it’s important to keep in mind that citrus flavors work extremely well with fish. A bit of salt, pepper, and any other spices you wish to add will elevate fish to flavors you never thought possible. Lime, orange, lemon work with a bunch of fresh herbs as well.   We always get this question: are fish and chips a “healthier” fast food option than the classic option of a hamburger, fries, and a soda? Not necessarily. Fried fish might be even worse than a burger due to the batter that it is fried in — that’s where all the oil gets concentrated. It should come as no surprise that a fish and chips meal may reach upwards of 1,400 calories and 2 grams of sodium in one sitting — something a burger and fries would have significantly less of (but not necessarily “better”).   After all, with the wide variety of delicious, nutritious, and protein-packed fish, who’s to say that your next barbecue should be one with red meat? Fish fits the bill just as good, and is twice as better.

The Truth about Popular Supplement Ingredients