Signs She’s Just Not that into You

Finding a girl, you’re into is hard, and finding one that’s also into you is even tougher. Women have a tendency to be very subtle in their actions, and leave a guy wondering if he’s missing something or not picking up on social clues. You’ve probably been in a situation before, where theirs a girl you like, and you want to ask her out, but you can’t really tell if she’s showing any interest. No one wants to be out right rejected and women, sometimes through social awkwardness and sometimes through intimidation, have a hard time giving an outright “No.” Here’s a few ways to tell she’s trying to get you to realize, she’s just not that into you. 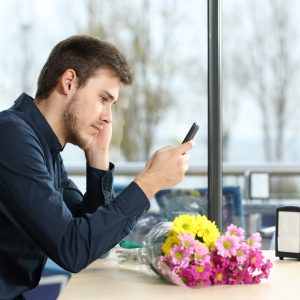 Men often like to invite women out for an event, without necessarily calling it a date. Maybe she said yes, but here comes the day of and she doesn’t show. This is the first clue. She never follows through on plans. If she’s constantly flaking on you, giving excuses often of why she missed it or can’t go, she probably just doesn’t want to go anywhere with you. It’s a hard pill to swallow but if she does not feel comfortable being alone with you or hanging out with your friends, she’s probably just going to lie to you to get you to leave her alone about it. This is especially true if you’ve maybe been a little to insistent about it and pushing for an answer. And if you do happen to catch her in the act, maybe you see her posting on social media about a party she told you she wasn’t going to, or you run into her after she tells you she’s home sick, be a gentleman. Realize she’s not interested and drop the issue, you don’t want to be the jerk who keeps calling her on it but refuses to take the hint.

The friendzone is a place every guy has been too, and it’s inevitable sometimes. I know you really like this girl, but if she calls you “dude” nine times out of ten, she’s not attracted to you. She may really like you, but not in that way. She’s trying to save your friendship with her, and really doesn’t want to hurt your feelings by rejecting you, so please for both of your guys’ sakes, take the hint. She may keep subtly suggesting you’re just friends. And sometimes this is a little unclear, but if you need some examples of what this looks like, here: She gives you the “side hug.” She introduces you to everyone as her “good friend.” She tells you she just “likes you as a friend.” If she’s ever side stepped a kiss. She has a boyfriend and they are happy together. Etc.… Sometimes its hard to accept, and maybe you have no interest in being her friend, in which that situation you should probably make that clear, so you don’t hurt her feeling even more when you decide to stop talking to her completely. 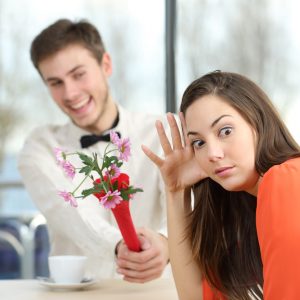 Maybe she doesn’t flake on your plans or only call you very platonic nicknames, but that still doesn’t mean she’s on the same wave length as you. Another great way to tell if she’s trying to let you down easy is if she evades all physical contact. She doesn’t want to hug you, kiss you, or play footsie. Heck, she might not even want to shake your hand, and this might not be because you repulse her or anything. She might just be trying to make it very clear she doesn’t want any kind of relationship with you. Don’t force it if you notice this situation, nothing is creepier than unwanted touching. Now this is trickier because maybe you haven’t known her for very long, but if your relationship with her never progresses past the occasional accidental brushed shoulder, it’s time you moved on.

At some point you may have gotten her number, maybe she gave it to you or you got it through a friend, but either way this is a pretty good situation to read for clues. If you text her and she never texts you back, easy she’s not interested, and you should probably leave it alone. If you text her and she responds but not very frequently this is not so straight forward. If you keep talking and she eventually opens up and she begins to send more and more responses, you might be good, but if this never happens she’s probably just answering to be polite. If you’ve been talking for a while and suddenly she just stops texting all together, she probably didn’t like the direction your conversation was headed. In short, if she doesn’t respond or is very short in her replies, don keep forcing the situation, drop it she’s not interested.

Being interested in someone is difficult sometimes. (They don’t call them crushes for nothing.) Sometimes you get luck and the feelings are mutual and beneficial for all involved, but the majority of the time it just ends up being an awkward few months. The back and forth we put ourselves through is the worst part of any maybe relationship, and I would even say it is worse than rejection. At least when you’re told the other party isn’t interested you have closer and there are no “what ifs” in the situation, but unfortunately, we often are left to wonder and overthink. Hopefully this list gave you some helpful tips on how to tell if a woman is interested or not, so you don’t have to lie awake at night and wonder. Relationships are hard enough without worrying if she wants to be in one or not.

Losing Weight by a Deadline: How Can We Drop Pounds Fast?